The great health benefits of cannabis can actually blow our minds and most of the states in the U.S. have legalized marijuana sales for medical purposes (click to learn about Marijuana as Medicine). 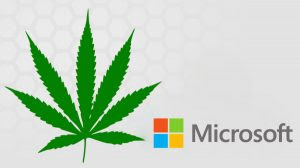 The 6% studies conducted to analyze the medicinal properties of marijuana have revealed that the plant contains chemicals that may help treat a range of illnesses and symptoms.

Its two active chemicals with medicinal applications are:

Marijuana’s manifold health benefits help in the improvement of lung health by reversing the carcinogenic effects of tobacco; treats and further prevents the eye disease Glaucoma by turning off a gene called Id-1.

CBD helps prevent cancer from spreading as well as it might protect the brain from concussions, trauma and spur creativity in the brain.

Marijuana is safer when compared to alcohol as it is less addictive and doesn’t cause as much physical damage, the chemical THC brings down the progression of Alzheimer’s disease, etc.

Microsoft and the Cannabis Industry

Keeping in mind these medicinal properties and the fact that twenty-eight states plus Washington D.C. have now legalized marijuana in some form or another while some others allow the recreational use of the drug.

Microsoft has surfaced as the first “big name” to engage in serving the legal marijuana trade and they will use Agrisoft Seed to Sale software to track Marijuana plants from “seed to sale”.

The software will provide the growers and producers in the cannabis industry with essential tools for plant tracking and management.

The Agrisoft Seed to Sale software is what Microsoft will begin marketing since their government cloud is working with “government solutions” division, which means that only state and local governments will be a part of these transactions.

For the enthusiasts and organizations that work towards the legalization of Marijuana sales, Microsoft’s involvement to even a small part of the business is a big step forward.

The software will help states that have legalized marijuana sales for medical or recreational purposes to keep a track on its sales and commerce within their territory and ensure compliance.

Compliance also includes jurisdictional laws and regulations for this controversial product which stands at number four (4) in the crop position and comprises a $36 billion market.